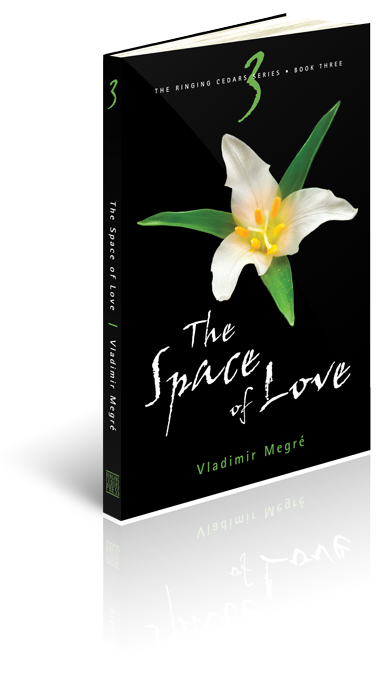 Nothing you have read in Books 1 and 2 has prepared you for Book 3 – The Space of Love.

News of the remarkable Anastasia's extraordinary powers has reached people in high places. Someone wants her captured for close "laboratory" study. As Megré attempts to return to the forest – where Anastasia has borne him a son – he finds his way blocked.

A helicopter hovers over her glade as armed agents close in. But these men with machine guns flee in horror when Anastasia gives them a terrifying taste of hell – and it's far worse than your worst nightmare!

Then… discover a village school designed, built and decorated entirely by students aged 7 to 17 years. Here they cook their meals, do administrative work, write their own textbooks and cover the entire high-school curriculum in just one or two years — mostly teaching each other - while learning three foreign languages, martial arts and ballroom dancing. They master ancient folk crafts, learn to shoot from an automatic rifle and to fight with swords. However they have little interest in TV or video games.

Instead they dance, draw, sing, pick strawberries in the surrounding fields and contemplate the meaning of the Universe and swim in mountain streams. They do not "prepare themselves for life" — they live every moment they breathe.

Imagine! A school where the students come and go as they please, and their parents pay no fees. With a waiting list in the thousands, this school completely redefines the word "education".
We've been there and seen it with our own eyes! Now you can read all about it here in this book...

Enter The Space of Love – you'll emerge recharged and excited by its remarkable revelations, with a totally new appreciation for life and all that your future holds.

“ Love dissolved in Space for one can touch the hearts of many. So that close to a loved one there will always be a Space of Love. This is the essence of Love, this is its designated purpose. ”