Back to Book 1 – Anastasia Read about Anastasia 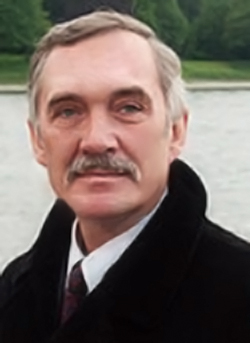 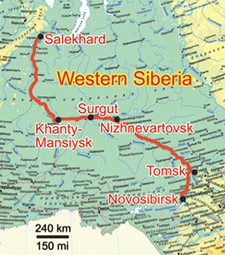 Path of the convoy's itinerary

Vladimir Megré, born in 1950, was a well-known entrepreneur from the Siberian city of Novosibirsk.

In 1994, during a stop on a trading trip along the mighty Ob River, a Siberian elder told Vladimir Megré about the existence of "ringing cedars" – sacred trees which can heal bodily diseases and elevate the human spirit. The elder told him of such a cedar growing in the Siberian backwoods.

Intrigued, but committed to his present venture, Vladimir Megré later began to delve into literature on Siberian cedar trees and became one of the first Russian businessmen to rediscover the tremendous folk medicinal, nutritional and commercial value of virgin oil pressed from Siberian cedar nuts. It seemed that knowledge of the secret techniques of pressing the oil had been lost.

In 1995, determined to rediscover this secret and launch a highly lucrative production of cedar nut oil, Vladimir Megré organized a second expedition along the River Ob.

On this trip however, an encounter with the elder's granddaughter, named Anastasia, transformed him so deeply that he abandoned his commercial plans, his trading business and temporarily even his family, and instead went to Moscow to fulfill his promise to Anastasia to write a book about what she had shared with him.

She told him she would imbue his books with an energy that would uplift the spirit and cause them to sell in the millions. True to her promise this life-changing book has become an international bestseller and is now touching the hearts of millions of people world-wide.

Anastasia, the first book of the Ringing Cedars Series, tells the story of his trade trips, his meeting with Anastasia and the incredible events that he witnessed during the three days he spent with her.

Not only did Anastasia display the most extraordinary physical, mental and psychic powers, but she also shared with him her unique outlook on a vast range of subjects as diverse as happiness, , spirituality, sexuality, , healing, gardening, nature and environmental issues, planetary change and much more.

Vladimir Megré could not have known that his 1994-95 trade trips would change his entire life and affect the whole of humanity. Yet this appears to be the inevitable impact of his discovery of Anastasia and her remarkable messages for the world as chronicled in the Ringing Cedars Series.

With over 10 million books sold in Russia alone, and another million sold in 20 different languages, English readers are now excitedly devouring these books – with more than 700,000 copies sold already – and bookstores claiming "these books are flying off the shelves!" A wave of excitement is literally sweeping the English-speaking world as everyday 100's more readers discover his books.

And true to her promise, Anastasia's messages in the Ringing Cedars Series continue to spread like a raging wildfire across Russia and Europe, where news reporters are now writing about a "new dawn" unfolding and an "eco-village revolution" taking place, which may change the country's – and the whole world's – destiny.

Vladimir Megré presently lives near the city of Vladimir, Russia, 240 km (150 miles) east of Moscow. His secretary can be contacted by e-mail at fond@anastasia.ru (Please note that he doesn't read or speak English.)