“Man1 has still not invented anything that is not already in Nature. The technology behind television is but a poor imitation of the possibilities of this ray.”
— Anastasia

I think the most unusual, mystical phenomenon I witnessed during my time in the forest was Anastasia’s ability to see not only individuals at great distance but also what was going on in their lives…

She did this with the help of an invisible ray. She maintained this was something everybody has, but people don’t know about it and are unable to make use of it.

Since the ray is invisible, I didn’t believe in it, in spite of her repeated attempts to demonstrate and explain how it worked, to find some proof or plausible explanation. And then one day…

“Tell me, Vladimir, what do you think daydreams are? And are many people able to dream of the future?”

“Daydreaming? I think a lot of people are able to do that. It’s when you imagine yourself in a future of your own desire.”

“Fine. So, you do not deny that Man has the capacity to visualize his own future, to visualise various specific situations?”

“And what about intuition?”

“Intuition… It’s probably the feeling one has when, instead of analysing what might happen or why, some sort of feelings suggest the right thing to do.”

“So, you do not deny that in Man there exists something besides ordinary analytical reasoning that helps him determine his own and others’ behaviour?”

“Wonderful! Good!” exclaimed Anastasia. “Now, the night-dream. The night-dream – what is that? The dreams almost all people have when they are asleep?”

“The night dream – that’s… I really don’t know what that is. When you’re asleep, a dream is simply a dream.”

“All right, all right. Let us call it just a dream. But you do not deny it exists? You and other people are aware that someone in a dream state, when his body is almost beyond the control of a part of his consciousness, can see people and all sorts of things going on.”

“Well that, I think, is something nobody will deny.”

“But still, in a dream people can communicate, hold conversations, empathise?”

“And what do you think, can a person control his dream? Call up in the dream images and events he would like to see? Just like on ordinary television, for example.”

“I don’t think that would work out for anyone. The dream, somehow, comes all by itself.”

“The ray I am telling you about consists of all the information, concepts, intuitions, emotional feelings one possesses, and, as a result, of dream-like visions consciously controlled by Man’s will.”

“How can a dream be controlled within a dream?”

“Not within a dream. Wide awake! As if pre-programmed, and with absolute accuracy. You only experience this in a dream and it is chaotic. Man has lost most of his ability to control, to control natural phenomena and himself. So he has decided that a night-dream is simply an incidental by-product of his tired brain. In fact, almost everybody on the Earth can…

“Well, if you like, I can try helping you see something at a distance right here and now?”

“Lie down on the grass and relax, let go, so that your body draws less energy. It is important that you are comfortable. Nothing standing in the way? Now think about the person you know best — your wife, for example.

Recollect her habits, how she walks, her clothing, where you think she might be right now, and turn the whole thing over to your imagination.”

I remembered my wife, knowing that at that moment she might be at our country home. I imagined the house and some of the furnishings and things. I remembered a great deal, and in some detail, but I didn’t see anything. I told Anastasia about all this, and she replied:

“You are not able to let go all the way, as though you were going to go to sleep. I shall help you. Close your eyes. Stretch out your arms in different directions.”

Closing my eyes, I felt her fingers touch mine. I began to immerse myself in a dream, or a wakeful doze…

…There was my wife standing in the kitchen of our country home. Over her usual dressing gown she was wearing a knitted cardigan. That meant it was cool in the house. Again some kind of trouble with the heating system.

My wife was making coffee on the gas stove. And something else, in the small crock-pot, ‘for the dog’. My wife’s face was gloomy and unhappy. Her movements were sluggish.

All at once she turned her head, tripped over to the window, looked out at the rain and smiled. The coffee on the stove was spilling over. She picked up the pot with its overflowing liquid but didn’t frown or get upset as she usually did. She took off the cardigan…

“Well? Did you see anything?” asked Anastasia.

“Yes, I did. And I saw her. But where is the proof that she was actually there in the kitchen at the moment I saw her in the dream?”

“Remember this day and hour, Vladimir, if you want to have proof. When you get home, ask her. Was there not something else out of the ordinary that you noticed?”

“Can’t think of anything.”

“You mean to say you did not notice a smile on your wife’s face when she went over to the window? She was smiling, and she did not get upset when the coffee spilled.”

“That I did notice. She probably saw something interesting out the window which made her feel good.”

“All she saw out the window was rain. Rain which she never likes.”

“I too was watching your wife through my ray and warmed her up.”

“So, your ray warmed her up – what about mine? Too cold?”

“You were only looking out of curiosity, you did not put any feeling into it.”

“So, your ray can warm people up at a distance?”

“It can gather certain kinds of information, or transmit. It can cheer up a person’s mood and partially take away someone’s illness. There are a lot of other things it can do, depending on the energy available and the degree of feeling, will and desire.”

“Interesting… You say every person can have a ray like this?”

“Of course everyone can. Even today people still have feelings and intuitions, the capacity to dream of the future, to conjecture, to visualise specific situations, to have dreams while they sleep — only it is all chaotic and uncontrollable.”

“Maybe some kind of training’s necessary. Some exercises could be developed?”

“Some exercises2 might help. But you know, Vladimir, there is one absolute condition that must be met before the ray can be controlled by the will…” 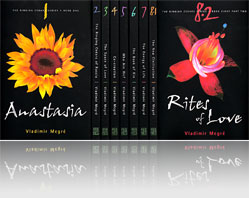 This nine-book series chronicles the life and wisdom of Anastasia, a mysteriously powerful woman discovered in 1995 living deep in the forests of Siberia, whose extraordinary messages are inspiring millions of readers worldwide to cast away their old lifestyles in pursuit of a more authentic existence.

The Ringing Cedars Series has sold more than 11 million copies in 20 languages worldwide — with virtually no advertising — and already it has sold more than 500,000 copies in English — increasing daily as the excitement spreads. This is simply brilliant, life-changing stuff. It's an absolute "must-read" for all of us.


“And what condition is that?”

1. The word Man (with a capital M) is used throughout the Ringing Cedars Series to refer to a human being of any gender. Details on the word’s usage and the important distinction between Man and human being are contained in the Translator's Preface to Book 1.

2. In a later chapter Anastasia provides these exercises